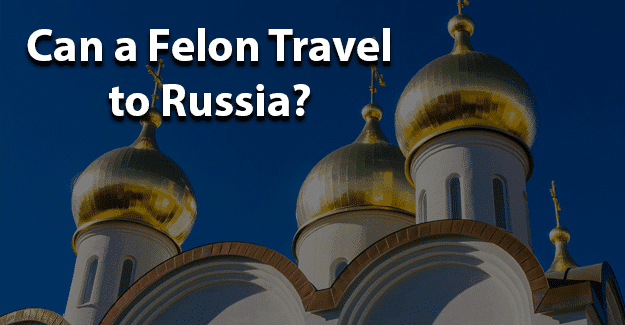 Many felons can recall having the desire to travel back when life was different and simpler, before their felony conviction.

This blog post will address the question of whether a felon can travel to Russia.

Upon release, felons must complete the terms of their sentence, including probation.

Why would felons want to visit Russia?  Well, for the same reasons anyone wants to travel there.  Felons may have served time in prison, but they have the same interests as any other U.S. citizen.

Traveling to Russia is no exception.

Russia is a popular tourist destination for a number of reasons.

Russia, formerly the Russian Federation, is in the northern part of Eurasia and is the largest country in the world in area, covering over six million square miles.

There are a wide variety of historical and cultural sites along with major geographical features ranging from majestic mountains to wide plains and plateaus, and a number of major rivers.

The Russian Orthodox Church has many beautiful, ancient cathedrals throughout the nation.  Russia is home to many famous literary figures.

Some felons’ families may have come from Russia.

The only restriction for them flying to Russia would be if they have a felony warrant outstanding against them.

Going on a cruise is also a popular means of travel to Russia.

Open loop cruises require a passport, regardless of the starting or destination port.  Regardless of the type of cruise, having a passport is important for felons in case the ship docks at a foreign port on the route to Russia.

Russia has requirements all U.S. citizens, regardless of whether they are felons or not, must meet in order to gain entry.

First, the law in Russia states that they must have at least six valid months remaining on their passport when entering the country.

In order to travel to Russia, a visa is required, which must be obtained before leaving the U.S.  To get a visa, tourists must first have an invitation, or visa support letter from an online provider catering to tourists.  They provide a Reservation confirmation and a Tourist voucher.

These documents, along with the visa application, must be submitted by the applicant or a travel agency to the Russian Ministry of Foreign Affairs for processing.

On the visa application, visitors must list all areas in Russia they intend to visit.

For felons especially, their conduct while in Russia is critical.  Of course they will want to stay out of legal difficulties.

This would obviously result in significant problems for felons who may find it extremely difficult to gain their release.  For those felons ending up in jail, good legal counsel will be necessary.

Laws in Russia are quite strict.  Anyone who commits a felony while in Russia will be tried as a Russian citizen with sentencing to a prison for foreigners.

It is best to strictly obey all laws and be able to leave the country as planned.

Encouraging a Felon to Travel to Russia

Families of felons who visit Russia can be helpful to those felons by encouraging them to travel outside the country for a sense of peace and relaxation.

A trip to Russia can also be a great opportunity to re-connect with their family.

Once the decision has been made to travel to Russia, be supportive of their making the trip.

Remind them of their commitment to live an honest life and how legal difficulties while in Russia will only defeat these efforts and may result in returning to prison.

So what do you think about this blog post about how a felon can travel to Russia?  Have you or someone you know traveled to Russia with a felony?  What was that like and were they successful?   Please tell us in the comments below.

1 thought on “Can a Felon Travel to Russia?”