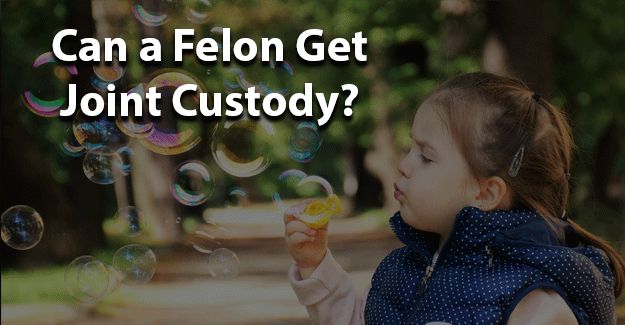 Many felons may not have had the best relationship with their families because they were living their criminal life, associating with the wrong crowd, hanging out in bad places, and not having a stable job.

Once felons are convicted, spouses and significant others may no longer be supportive.  Marriages end and relationships are damaged or destroyed.

It is more difficult when children are involved.  When the marriage ends, what happens to the children?  There is often a custody battle with the felon and significant other trying to get custody.

This blog post will examine the question of whether a felon can get joint custody.

When the question of custody arises, it comes down to what is in the best interest of the child.

There is a lot for the court to consider when a divorce takes place.  If one spouse has a felony conviction, information regarding the criminal history becomes essential.

Among the critical factors will be:

The judge will want to know what type of offense it was.  If it was a conviction for child abuse, child endangerment, or a sexual offense, it is extremely unlikely that they can get joint custody.  There will also be severe restrictions on parental rights for even visitation.

It is important how the situation looks to a judge.  This is the time to get legal counsel.

Convictions like domestic abuse and a drug- or alcohol-related offense will appear more serious to the court.

Offenses such as assault, battery, or weapons crimes raise issues about violence and anger management.  There may be a domestic violence history, which would make it more difficult to gain joint custody.

Any drug or alcohol conviction can create a problem in getting joint custody.

The court will order a felon to have a hair follicle drug test that would reveal any drug usage for the past few months.  If they fail, custody will likely be out of the question and would limit visitation as well.

A DUI, felony or misdemeanor, will be seen as placing a child at risk for custody.

The court will inquire about the identity and relationship of the victim.  If it was the felon’s child and the injury was emotional, custody and visitation will be limited.

If it was sexual abuse or severe physical injuries, the judge will look at the risk of future injury and not only limit custody but could terminate parental rights completely.

The age of the conviction is also important.  An old felony, especially if it is a single incident would be viewed differently from a more recent conviction.

Joint custody doesn’t mean that the child will spend equal time with each parent.  It means joint legal custody.  The child may still live primarily with one parent and visit the other.

Steps in Getting Joint Custody

Meeting with an attorney to discuss joint custody, it is important for felons to be honest about their situation.

Felons need to be able to demonstrate the positive steps they have taken in beginning to live an honest life.

They must be able to show how they have dealt with their circumstances by completing a re-entry program such as substance abuse treatment.

They can also show they are stable by getting a job and improving their financial situation.  They can maintain a steady job to demonstrate their ability to provide for their child if they are granted joint custody.

Often a custody evaluation will be requested by the court to help determine whether to grant joint custody.

Typically, a custody evaluation is a series of interviews conducted by a mental health professional with the child and each of the parents to make a recommendation to the court.

It may also include observations of the child interacting with each parent.

Among the issues considered by the court are:

The judge will have access to the criminal history of each parent.

Felons must be honest about their past.

Encouraging a Felon Who Wants to Get Joint Custody

Families of felons are usually very invested in adopting a child and creating a loving family.

Stand by your loved one.  Encourage them and help them do what it takes to get joint custody.

This can be a frustrating, discouraging process to go through.

To have joint custody will help felons realize that they aren’t defined by their crime and can have the opportunity to live an honest life.

They must be prepared if the decision from the judge doesn’t give them joint custody.  They can still have visitation and be an important, loving parent for their child.

What do you think about this blog post?  Have you or someone you know tried to get joint custody as a felon?  What was that like for them, and what happened?  Please tell us in the comments below.

2 thoughts on “Can a Felon Get Joint Custody?”