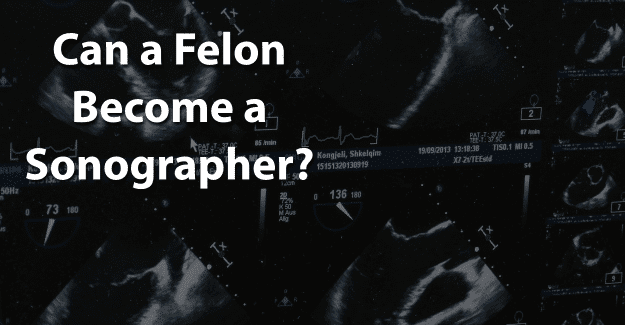 It is a major challenge for felons to find a job after being released from prison. There are resources available even though felons may not think there are any options for them. Companies that hire felons have learned that they make good employees, but it might be in a different career from the time before their legal difficulties.

This blog post will address the issue of whether or not a felon can become a sonographer.

What is a Sonographer?

A sonographer, also called an ultrasound technician, is responsible for scanning a patient’s blood flow, internal tissues, and organs using high-frequency sound waves to create detailed images of various areas of the human body. The sound waves bounce off internal organs to an ultrasound device, transforming them into images.

There are many duties that an ultrasound technician performs daily. These include:

A sonographer uses a variety of tools to create images of specific parts of the body, including organs and tissues, which may involve the abdomen, blood vessels, breasts, and heart. These images are important in detecting a variety of diseases, including heart and vascular diseases.

Most sonographer jobs are found in hospitals or outpatient clinics. Ultrasound techs are also hired in some private physician practices.

There are many traits important to becoming an effective sonographer. These include:

What Education/Training Does a Sonographer Need?

In order to become a sonographer, an applicant should be at least 18 years of age with a high school diploma or a GED. Both associate degree and bachelor degree programs in sonography are available. There are also some certificate-based programs, but these are primarily aimed at those already employed in related healthcare occupations. These programs can last from one to four years.

Students are typically required to complete clinical hours in their program, which gives them the opportunity to work in a healthcare setting under the supervision of an experienced professional. All sonographer programs must be accredited through the Commission on Accreditation on Allied Health Education Programs (CAAHEP).

After completing a sonography program, an applicant can work toward certification. There are at least two different organizations offering certification, which include the American Registration of Radiologic Technologists (ARRT) and the American Registry for Diagnostic Medical Sonography (ARDMS). Different exams are required for each of the various credentials available through ARDMS.

The following courses are typically required in an ultrasound technician program:

All candidates will also be required to pass a drug screen/background check.

How Much Does a Sonographer Earn?

There are approximately 50,300 practicing sonographers in the U.S. currently. The median pay of a sonographer in 2013 was $66,410, according to the U.S. Bureau of Labor Statistics. States that have the highest salaries for ultrasound technicians are: New York, California, Alaska, Washington, and Colorado. Type of certification and amount of experience make a large difference in a sonographer’s salary level.

According to the U.S. Bureau of Labor Statistics, between 2012 and 2022, the number of ultrasound technician jobs is projected to rise 46 percent. Part of this is because ultrasounds are gaining more usage since it is a low-risk, non-invasive way to diagnose patients.

A felon can pursue any degree he or she wants. Approximately 60% of colleges include criminal history in their admissions process, although there is no standard policy regarding a background check. For many colleges, including a question on their application regarding criminal offenses is the only background check performed.

Any felon that wants to get a degree can find a college that will accept him or her. The challenge is in landing a job after graduation.

It is important to be honest in filling out an application for a job or when applying for certification as a sonographer. If a felony isn’t disclosed but is found on a background check, this constitutes fraud and is punishable by possible jail time. It is a crime to falsify an application, which could result in being sent back to prison.

In order to be successful as a sonographer, it is essential for felons to be honest about their background. They are already viewed with negative perceptions of being dishonest, untrustworthy, and unwilling or unable to follow directions from authority figures.

Having their record expunged can give them the chance needed to begin with a clean record and succeed in becoming a sonographer. Expunging a criminal record allows anyone to honestly state on any application that he or she has not been convicted of a crime.

It is a big challenge, but it might be worth it for a felon wanting to become a sonographer. Giving him or herself the best chance for success by having his or her record expunged and also documenting any training programs or additional education could make the essential difference.

Having support from family, friends, or previous employers can make a major difference. A felon doesn’t have to be defined by his or her crime. We are not defined by our mistakes but by how we recover from them. He or she can begin again and live an honest life no matter how difficult it might seem.

What do you think about this blog post? Are you or someone you know in the situation of trying to become a sonographer with a felony? What was that like for them, and how did they achieve success? Please tell us in the comments below.

4 thoughts on “Can a Felon Become a Sonographer?”