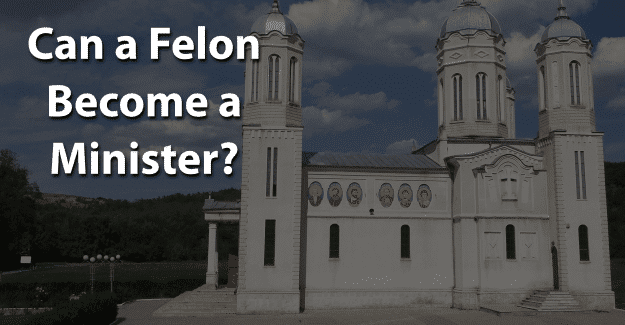 Felons in prison often develop a stronger faith as a result of their incarceration and having time to reflect on their mistakes. Sometimes, this deepened faith may lead them into thinking of a career in the field of religion after their release. For many of those this might mean considering the vocation of a minister.

This blog post will address the issue of whether or not a felon can become a minister.

What is a Minister?

A minister is a person who has been ordained to spread the Word of God. He is given the responsibility to serve people and lead them to a union with God. He does this by teaching people, guiding them, and offering pastoral care and spiritual guidance.

The duties of a minister include:

There are numerous skills required to be a minister, including:

What Education/Training Does a Minister Need?

In order to become a minister, most major religious denominations have one primary requirement, which is typically a master of divinity degree from a seminary school or school of theology.

These degree programs include studies in:

Each denomination sets its own criteria for distinguishing between the two, but generally, religious denominations consider an ordained minister to be permanent clergy. Ordination permits a minister to perform church rites, such as baptisms, marriages, and funerals.

A licensed minister is usually authorized to perform some but not all ministerial duties. Each state decides on the requirements to become a licensed minister, but typically someone must be at least 18 years old to be eligible for licensing as a minister.

How Much Does a Minister Earn?

According to the U.S. Bureau of Labor Statistics there are approximately 49,320 ministers in the United States. The median salary for a minister was $45,720 in 2016. The median salary is that level for which half earn more and half less.

Experience, location, and religious denomination will make a difference in the salary of a minister. The need for ministers is about average with a growth rate of 6% between 2016 and 2026.

Criminal activity in one’s background does not automatically disqualify an applicant for the ministry. Each denomination establishes its own criteria related to felony convictions. This is part of what is considered to be separation of church and state.

It is best to meet with a vocation director for the particular religious denomination that he or she is considering and be honest, even about things that will not come up in a required criminal background check. It is better to tell them than for them to discover offenses on their own.

Typically, an applicant must give evidence of an overall personal balance, good moral character, a love for the truth, and proper motivation. This includes the requisite human, moral, spiritual, intellectual, physical, and psychological qualities for the ministry.

One significant legal risk for churches of most denominations is called negligent selection, which is a failure to use reasonable selection of a ministerial candidate or other church worker having frequent contact with members of the congregation, especially minors. Efforts to reduce this risk involve extensive questions on an application and a more formal background check.

Typically, an applicant must undergo a thorough screening process. Personal interviews with the applicant, evaluations from pastors and teachers, records, and evaluations from a previous seminary or religious community if applicable, academic records, standardized test scores, psychological evaluations, and criminal background checks are considered together with an assessment of the applicant’s motivation.

Those who do not fulfill these entrance requirements may not be admitted. A psychological assessment is often an essential part of the admission procedure.

In order to be successful in their pursuit of becoming a minister, it is essential for felons to be honest about their background. It is important to be honest in filling out any licensing or job application. If a felony isn’t disclosed but is found on a background check, this constitutes fraud and is a punishable crime which would require an attorney and could result in being sent back to prison.

They are already working with the negative perceptions of being dishonest, untrustworthy, and unwilling or unable to follow directions from authority figures. This can make it difficult to land a job as a minister.

Having their record expunged can give them the chance needed to begin with a clean record and succeed in becoming a minister. Expunging a criminal record allows anyone to honestly state on an application that he or she has not been convicted of a crime.

It is a big challenge, but it might be worth it for a felon wanting to become a minister. Giving him or herself the best chance for success by having his record expunged and also documenting any training programs or additional education could make the essential difference.

Having support from family, friends, or religious advisors can make a huge difference. A felon doesn’t have to be defined by his crime. We are not defined by our mistakes but by how we recover from them. He can begin again and live an honest life no matter how difficult it might seem.

What do you think about this blog post? Have you or someone you know been in the situation of trying to become a minister with a felony? What was that like for them, and how did they achieve success? Please tell us in the comments below.

1 thought on “Can a Felon Become a Minister?”