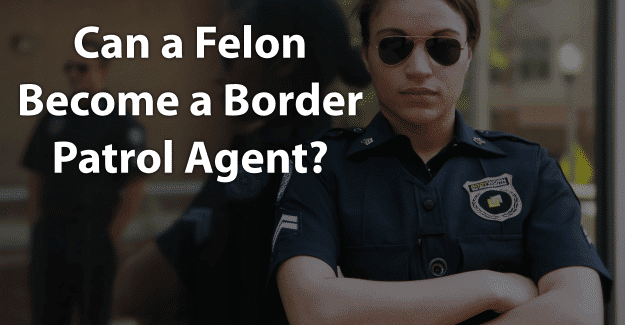 Felons find it quite challenging to get a job after being released from prison. There are resources available even though felons may not believe anyone will hire them. Those who have hired felons have learned that they make good employees, but it might be in a different career from one felons had before their conviction.

This blog post will address the issue of whether or not a felon can become a border patrol agent.

What is a Border Patrol Agent?

A border patrol agent is a law enforcement officer who enforces federal laws when people or goods travel into the United States along the 6,000 miles of the borders of Mexico and Canada as well as along the 2,000 miles of the coasts of Puerto Rico and Florida.

The primary objective for a border patrol agent is to protect our country by reducing the chance that dangerous people and goods enter the United States in the various ports of entry. Some of the major activities include maintaining traffic checkpoints along highways leading to and from border areas, conducting city patrol and transportation checks, and anti-smuggling investigations.

There are many different tasks and types of work to be done in this job. Depending on the position, the border patrol agent’s job involves a wide range of functions.

The basic duties of a border patrol agent are:

There are many skills required to be successful as a border patrol agent. These include:

What Education/Training Does a Border Patrol Agent Need?

A prospective border agent must meet the following qualifications:

While not required, it is recommended that candidates either possess a degree in criminal justice or a related field, or have equivalent work experience. He or she will also have to pass a border patrol exam to be considered for employment. The exam includes a section to determine one’s ability to learn foreign languages.

Previous employment experience is an important factor, so it’s important to list all relevant work history. It is especially beneficial to list any computer skills as well as foreign languages that he or she knows.

In order to be granted a permanent position, a candidate must:

All new border patrol agents must successfully complete a minimum of 19 weeks of training at the Border Patrol Academy in New Mexico. This residential training program covers nationality and immigration law, firearms use, and physical training. Non-Spanish-speaking candidates must complete Spanish language training. Trainees will be required to pass a final fitness test in order to graduate from the Border Patrol Academy.

How Much Does a Border Patrol Agent Earn?

The salary range is from $40,000 to $83,000, depending on education and experience. Job growth for border agents is estimated to be 4% from 2016 to 2024, although this is subject to significant change depending on federal plans for changes in border-protection measures.

A felon can pursue any degree he or she wants. Approximately 60% of colleges consider criminal history in their admissions process, although there is no standard policy regarding a background check. Any felon that wants to get a degree in criminal justice or a related field can find a college that will accept him or her.

The bigger challenge is in getting a job as a border patrol agent following graduation. The statutes for border agents clearly indicate that any felony or misdemeanor conviction will disqualify a candidate.

It is important to be honest while filling out an application for a job or when applying for certification as a border patrol agent. If a felony isn’t disclosed but is found on a background check this constitutes fraud and is punishable by jail time. It is a crime to falsify an application, which could result in being sent back to prison.

In order to be successful as a border patrol agent, it is essential for felons to be honest about their background. They are already seen as being dishonest, untrustworthy, and unwilling or unable to follow directions from authority figures.

Having their record expunged can give them the chance needed to begin with a clean record and succeed in becoming a border patrol agent. Expunging a criminal record allows anyone to honestly state on an application that he or she has not been convicted of a crime.

It is a major challenge, but it might be worth it for a felon wanting to become a border patrol agent. Giving him or herself the best chance for success by having his or her record expunged and also documenting any training programs or additional education could make a critical difference.

Having support from family, friends, or previous employers can make a huge difference. A felon doesn’t have to be defined by his or her crime. We are not defined by our mistakes but by how we recover from them. He or she can begin again and live an honest life and achieve a goal of becoming a border patrol agent no matter how difficult it might seem.

What do you think about this blog post? Are you or someone you know been in the situation of trying to become a border patrol agent with a felony? What was that like for them, and how did they achieve success? Please tell us in the comments below.

2 thoughts on “Can a Felon Become a Border Patrol Agent?”