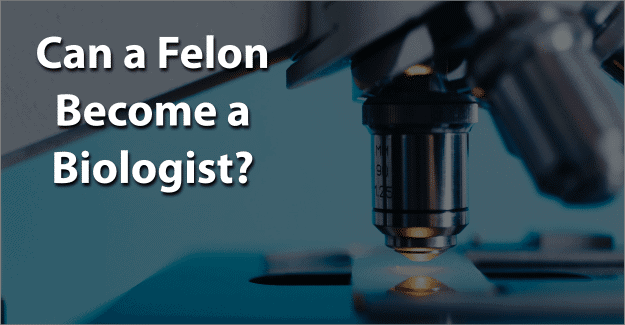 Felons may find it challenging to find a job after being released from prison. However, there are resources available even though felons may not believe it. Those who have hired felons have learned that they make good employees, but it might be in a different career from one they had previously.

This blog post will address the issue of whether or not a felon can become a biologist.

What is a Biologist?

A biologist is “a scientist who studies life and organisms’ relationships to the environment. He or she investigates humans, animals, and bacteria to understand how the body functions and factors that influence an organism.”

By collecting data a biologist proves or disprove theories of how an organism functions in the fields of medicine and agriculture.

Many biologists are employed by the government, by a university in teaching and research, and by private industry as an ecologist or for a zoo.

Many biological scientists develop a specialty in a specific area of animal and plant species. While each biologist’s job is unique they typically engage in the following duties:

There are numerous skills necessary to be successful as a biologist, including:

What Education/Training Does a Biologist Need?

The minimum requirement to obtain entry-level work as a biologist is usually a bachelor’s degree. To become a biologist will require a degree in biology or a related discipline. Required courses typically include biology, microbiology, molecular biology, chemistry, physics, mathematics, and computer science. For those wanting to teach at a university or do research, a Master’s degree or a Ph.D. may be necessary.

There are a number of areas of specialty in the field of biology, including developmental biology, ecological biology, microbiology, molecular biology, zoology, biogeography, paleontology, and biochemistry.

No type of license is necessary to become a biologist. The American Institute of Biological Science (AIBS) offers certification of those who have attained a certain level of education and experience. Having this certification allows an individual applying for a job as a biologist to demonstrate competency in the field.

How Much Does a Biologist Earn?

The U.S. Bureau of Labor Statistics indicates that there are approximately 35,000 practicing biologists in the United States. This occupation is expected to show an 8% growth by 2026 which is about average.

The median salary of a biologist in 2016 was $72,220 annually. This is the salary at which half of chemists earned more and half earned less.

A felon can pursue any degree he or she wants. Approximately 60% of colleges consider criminal history in their admissions process, although there is no standard policy regarding a background check. Any felon that wants to get a degree can find a college that will accept him or her. The challenge is in obtaining a job after graduating.

It is important to be honest while filling out an application for a job or when applying for certification as a biologist. If a felony isn’t disclosed but is found on a background check, this constitutes fraud and is punishable by law. It is a crime to falsify an application, and could result in being sent back to prison.

In order to be successful as a biologist, it is essential for felons to be honest about their background. They are already viewed with negative perceptions of being dishonest, untrustworthy, and unwilling or unable to follow directions from authority figures.

Having their record expunged can give them the chance needed to begin with a clean record and succeed in becoming a biologist. Expunging a criminal record allows anyone to honestly state on an application that he or she has not been convicted of a crime.

It is a big challenge, but it might be worth it for a felon wanting to become a biologist. Giving him or herself the best chance for success by having his or her record expunged and also documenting any training programs or additional education could make the essential difference.

Having support from family, friends, or previous employers can also make a huge difference. A felon doesn’t have to be defined by his or her crime. We are not defined by our mistakes but by how we recover from them. He or she can begin again and live an honest life no matter how difficult it might seem.

What do you think about this blog post? Are you or someone you know been in the situation of trying to become a biologist with a felony? What was that like for them, and how did they achieve success? Please tell us in the comments below.