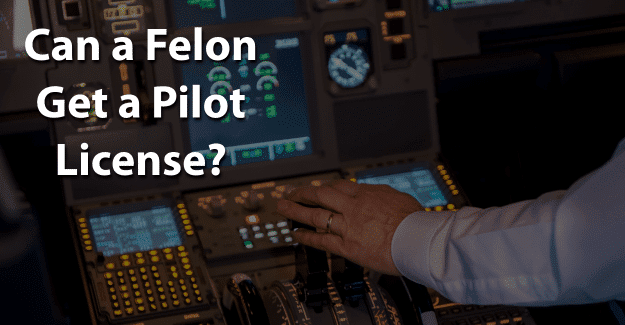 When it comes to getting a job after their release from prison, felons find it challenging. They may think no one will hire them, but there are resources available. They’ll have to be open and willing to learn a new trade or start a different career.

Those felons with experience and interest in flying might think of becoming a pilot. This blog post will address the issue of whether a felon can get a pilot license.

What is a Pilot?

A pilot works in the aviation industry, flying a plane to transport people or goods from one place to another. He or she is employed by an airline, corporation, or government agency. There are different types, or privilege levels, of pilots, depending on the type of aircraft they can fly.

The various levels of a pilot after receiving certification from most basic to most advanced are:

What is a Professional License?

A license is issued by a state agency to practice a profession and is required in order to call oneself a licensed professional. Some states have a single license and some have a level system. Licenses and requirements vary from state to state.

Licensing can be viewed as mandatory certification. Under a licensure system, states define the practice of a profession and stipulate that these tasks may be legally performed only by those who are licensed.

On the other hand, certification is typically a voluntary process, although certification can be mandatory or required to practice in certain states.

Certification is often provided by a private organization for the purpose of providing the public protection. It shows that the individuals who have successfully met all requirements for the credential have demonstrated their ability to perform their profession competently.

A license or certification shows that someone has the knowledge or skills necessary to do a job.  Typically, these types of credentials are attained after completing a certain level of education. Practical experience through an internship, residency, or on-the-job training is also included.

Licenses are legally required by the government to work in occupation while certification is not.

To become a pilot, you must get a pilot license.

What is Required to Get a Pilot License?

An applicant to get a pilot license must:

Pilot training consists of a combination of ground school and flight training. Ground school covers the basic information a pilot needs to know regarding:

As part of any licensing application, a felon must disclose information about a felony conviction. This makes it quite challenging for felons. It doesn’t mean that any felony conviction would result in denial of an application by the FAA, but it indicates that the FAA makes decisions on a case-by-case basis.

Any felony conviction involving drugs or alcohol can prevent someone from obtaining a pilot’s license. FAA regulations state that federal or state drug convictions are grounds for rejection for as long as one year. DUI convictions are subject to the same stipulations.

Anyone who has been determined to be a security threat by the Transportation Security Administration (TSA) can be disallowed from obtaining a license.

Crimes that can permanently disqualify an applicant include:

A felon would have to provide detailed information regarding his or her felony, including the type of offense, how long ago the conviction was, and their efforts at rehabilitation and living an honest life since their release.

Another challenge for felons after becoming a pilot is when they seek a job as a pilot. To get an airport identity badge for an airport pilot’s position, a detailed history is required. This includes a work history and criminal history records.

A background check is conducted through the FBI and involves a fingerprint identification. Any gap in employment for more than six months in the past ten years must be explained.

To be successful in this pursuit, it’s essential for felons to be honest about their background. If a felony isn’t disclosed but is discovered on a background check, this is fraud and is a punishable crime.

There are many success stories, as the Guide to Being Employed reveals, showing how having a goal, commitment, dedication, and perseverance can assist felons in achieving their dream.

There are re-entry programs, such as drug treatment, and educational opportunities for felons who need them. For many felons, having their felony expunged can give them the chance they need to begin with a clean record and succeed in getting a pilot license.

It’s a significant challenge, but it might be worth it for a felon that wants to become a pilot and get a license. Having his or her record expunged and also documenting any training programs or additional education could make the essential difference in a felon succeeding in getting his or her pilot’s license.

Having support from family, friends, or previous employers can also make a huge difference. A felon doesn’t have to be defined by his or her crime.

We’re not defined by our mistakes but by how we recover from them. He or she can begin again and live an honest life no matter how difficult it might seem.

What do you think about this blog post? Have you or someone you know been in the situation of trying to get a pilot license with a felony? What was that like for him or her, and how did he or she achieve success? Please tell us in the comments below.