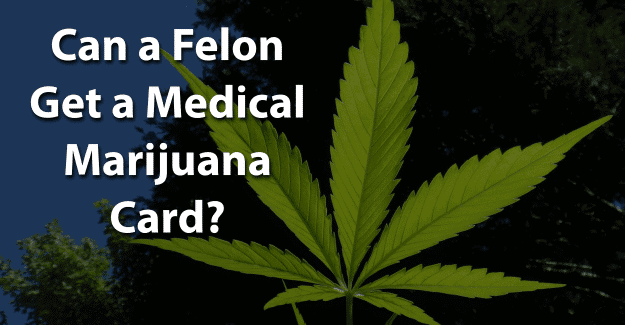 Felons who have been incarcerated a long time are exposed to a variety of illnesses. These can become chronic medical conditions that they will have to deal with long after they return to society.

The question is whether a felon can get a medical marijuana card. Let’s understand this.

What Is Medical Marijuana?

Medical marijuana is an alternative medicine for those individuals suffering from various disorders that allows them to improve their quality of life.

It is a substance that treats medical conditions using the marijuana plant and the chemicals it contains. When used otherwise, it is simply recreational marijuana.

What Is a Medical Marijuana Card?

Reasons to Get a Medical Marijuana Card

There are a number of medical conditions that are thought to respond to medical marijuana. Cannabis is often a recommended alternative treatment for a number of such conditions, including:

Marijuana has also been shown to provide relief to other medical conditions, including depression and anxiety.

Research has shown that the greatest effects of medical marijuana are in conditions like chronic pain, negative effects of chemotherapy, and the spasticity that accompanies multiple sclerosis (MS).

Medical marijuana is not allowed in all states. Each state makes its own determination. Some states permit only terminally ill patients to use marijuana legally.

All marijuana use that is for medical reasons must be approved in the individual state’s legislature.  Patients can be approved through medical marijuana recommendation, evaluation, and card registry.

How Do You Get a Medical Marijuana Card?

A physician who has a medical marijuana license can initiate the process. A medical marijuana card is available through the Department of Health Services in the state in which you reside and is usually valid for one year.

When it expires, it can be renewed through the same process as before. The renewal process that is used verifies a patient’s information in receiving a new medical marijuana registry card and a new marijuana identification number.

After obtaining a medical cannabis card, there are stipulations about how much marijuana you are legally allowed to possess. State laws differ, but you can possess as many as six mature marijuana plants and up to eight ounces of processed marijuana in states according to legal guidelines.

The record of medical marijuana evaluation is protected by federal laws like the Health Insurance Portability and Accountability Act (HIPAA). This ensures that your name will not appear on a list of marijuana users maintained by the DEA.

Where Do You Get Medical Marijuana?

A physician’s recommendation will allow you to obtain medical marijuana through a dispensary. There are two types of dispensaries, depending on what they sell.

These include a medical and recreational dispensary. A medical dispensary is only allowed to sell marijuana according to a licensed physician’s recommendation.

In order to obtain medical marijuana at a medical dispensary, you must meet the following requirements:

Can You Get a Medical Marijuana Card with a Felony?

It is possible to obtain a medical marijuana card with a felony conviction. If you want this ID card you can apply through a licensed physician, but you will be subject to a background check.

This background check will focus on the criminal section of your record. While the offenses listed in your record are important, the most critical will be whether you have been convicted of a felony drug offense. If so, you will not be eligible to get a medical marijuana card.

For those who want to obtain a medical marijuana card, you must be aware that a background check will be run. For those meeting the criteria, you can seek to have your record expunged.

What If You Are Denied a Medical Marijuana Card?

Then, you may not have a qualifying medical condition. Only certain medical issues are covered by medical marijuana statutes.

For many states, the following is a list of conditions that can be approved:

Next, you may not be old enough at the time you complete your application. Generally, you must be at least 18 years old.

You could have made errors in the provided information or completed the application improperly.

Finally, you may have a felony conviction that will eliminate you from consideration. The most common type of felony that will lead to a denial of your application is having a drug-related offense.

You can be subject to civil and criminal penalties depending on your state of residence. A medical marijuana card ensures that you are a registered patient within your state which can help avoid possible legal issues.

You must be honest in disclosing all information. A felony that isn’t disclosed but is discovered on a background check is fraud, punishable by possibly being sent back to prison.

Remember that you don’t have to be defined by your crime. We are not defined by our mistakes but in how we recover from them. You can live an honest life, no matter how challenging it may seem.

What do you think about this blog post? Have you or someone you know been in the situation of trying to get a marijuana card with a felony? What was that like, and what happened? Please tell us in the comments below.

8 thoughts on “Can a Felon Get a Medical Marijuana Card?”