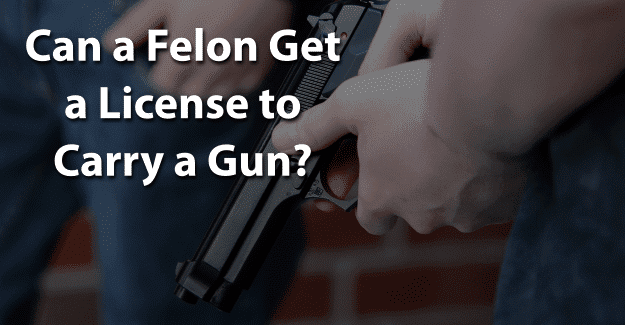 There are federal restrictions against felons owning a gun regardless of whether or not their crime involved a firearm. This blog post will address the question of whether or not a felon can get a license to carry a gun.

What is a Gun License?

A license is issued by a state agency for a specific purpose and shows that someone has certain knowledge or skill. Typically, these types of credentials are attained after completing certain educational requirements.

A firearm license is a license issued by the government that allows a person to:

Firearm licenses are not required in all areas. A license differs according to the firearm or activity. Some places require a firearm license to:

Some areas need separate licenses for handguns, rifles, and shotguns. Most states don’t require a license to purchase a handgun. All states that require a gun license demand:

Typically, a person must be at least 18 years old to apply for a gun license or to purchase a firearm. Federal law requires anyone buying a gun from a registered dealer to be at least 21 years old.

Licensing laws help ensure that gun owners abide by the laws and are legal, safe, and responsible when buying a firearm. Licenses are typically issued only after an applicant has completed a background check, a safety training course, and passed a written and performance-based test on gun use and safety.

Federal law doesn’t require licensing for gun owners or those who buy guns. Licenses for firearms are enforced at the state level.

A gun permit is a special type of a gun license. A permit allows a particular use of a gun. An example is a permit to carry a concealed weapon.

What is Required to Get a Gun License?

Obtaining a gun license involves a number of steps set down by federal law rather than state law.  Background checks are designed to determine if a person is prohibited from purchasing guns under federal law.

Most guns cannot be carried in a concealed manner, although many states do have laws regarding the sale and purchase of handguns for concealment.

Obtaining a gun license depends upon the state but typically involves several requirements. Many of these licensing laws impose a background check on someone who wants to purchase a firearm.

Three states – Illinois, Massachusetts, and New York – require a license to own firearms. New York’s law applies only to handguns. Only California requires all firearm purchasers to obtain a certificate demonstrating completion of a required firearm safety course.

Seven states require a license to possess a gun and a firearm safety certificate for all types of firearms:

Seven states require a license for purchasing or possessing a handgun:

In 1934, the federal government passed a law denying anyone convicted of a violent felony the right to own a gun.

This law remained until the Gun Control Act in 1968 when it was amended to include all persons convicted of any felony, even those that did not involve violence. This law remains in effect until the current day.

Gun control laws in the U.S. originated in the 20th century. Most gun control laws are based on state policies rather than on federal laws, though they vary from state to state.

Most states do not issue gun licenses to convicted felons or those convicted of violent crimes such as assault, aggravated robbery, rape, or murder.

A record of unlawful possession or sale of controlled substances, domestic violence, or having an outstanding arrest warrants can prohibit the person from gaining a license.

While a felon is denied the ability to get a firearm license, there are procedures available to regain this right, known as restoring firearm rights.

First, the applicant must not have been convicted of a ‘forcible’ felony within the past 20 years. Also, at least 20 years must have elapsed since the end of any incarceration for that felony.

Next, the applicant’s criminal history and reputation must indicate that the applicant will not act in a manner considered dangerous to public safety. Restoring a felon’s firearm rights must not be considered contrary to the public interest or federal law.

Another way to have firearm rights restored is by seeking a presidential pardon. To obtain a federal pardon, felons must wait five years after completion of their sentence. Then they may contact the federal government regarding clemency. They should first seek legal counsel.

Making a Case for Getting a Gun License

Maintaining and documenting community involvement will be valuable to felons wanting to regain firearm rights as well as any other rights. Volunteer work and other contributions to society will aid their case.

Employment is probably the most challenging aspect of returning to society. Many felons struggle with finding a job because the stigma of having a felony record deters employers from hiring felons.

Having support from family, friends, or previous employers can make a huge difference. A felon doesn’t have to be defined by his or her crime. We’re not defined by our mistakes but by how we recover from them. He or she can begin again, live an honest life, and achieve his or her goal no matter how difficult it might seem.

What do you think about this blog post? Have you or someone you know been in the situation of trying to get a license to carry a gun with a felony? What was that like for him or her, and how did he or she achieve success? Please tell us in the comments below.

1 thought on “Can a Felon Get a License to Carry a Gun?”