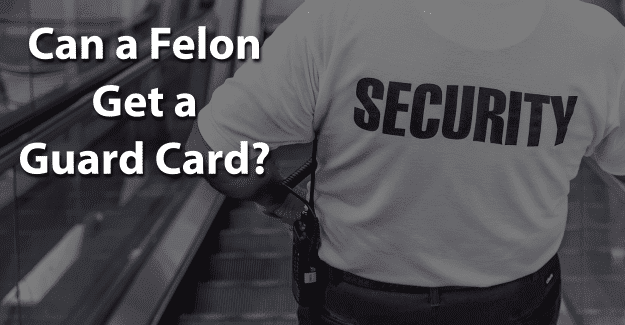 There are resources available for felons, although they may not believe anyone will hire them. Those who have hired felons have learned that they make good employees. Those with an interest in security work may want to look into becoming a security guard.

This blog post will address the issue of whether or not a felon can get a guard card.

What is a Security Guard?

A security guard patrols and monitors property to protect it against vandalism, theft, and illegal activity. A guard enforces laws and regulations, controlling access to a business, building, or other public and private areas.

In order to become a security guard, a person must have the following:

What is a Guard Card?

The first requirement for a guard card is a training course and passing an exam. The minimum length of the training course is usually 40 hours. Then, there is an additional course, typically about eight hours long and often called a “Power of Arrest.” The next step is to have fingerprints taken for submission to the FBI.

Achieving this type of guard card permits someone to work as an unarmed security guard.

There are three steps to obtain an armed guard card:

What is a Professional License?

A license is issued by a state agency to practice a profession and is required to call oneself a licensed professional. Some states have a single license and others have a level system. Licenses, as well as requirements, vary from state to state and from profession to profession.

Licensing is a type of mandatory certification. Under a licensure system, states define the practice of a profession and stipulate that the position may be legally performed only by those who are licensed.

Certification, on the other hand, is typically a voluntary process, although certification can be mandatory or required to practice in certain states. Certification is often provided by a private organization for the purpose of providing the public protection on those individuals who have successfully met all requirements for the credential and demonstrated their ability to perform their profession competently.

The following states offer a Certificate of Rehabilitation:

A Certificate of Rehabilitation is a court-issued document stating that a person in is obeying the laws and demonstrating good moral character. The rehabilitation certificate states that a felon is rehabilitated and no longer a threat to society or a disreputable person.

Other states will make a determination based on the type of felony and the length of time since the conviction. Depending on the state, a rehabilitation certificate can restore the rights to carry firearms.

A security guard service that hires a security guard must register that person with the Public Safety Commissioner. The commissioner is allowed to deny approval because of a felony conviction after consideration of certain factors.

The law prohibits the commissioner from approving someone who has a conviction of a:

In order to deny an application because of a prior criminal history, the commissioner must determine that the applicant is unsuitable for the position based on the:

Additionally, to work as a security guard for a small company, an employer may accept the results of a state review background check rather than a more thorough Federal and FBI background check.

When applying for a security guard position, a background check will be done at some point. The qualifications for the position will vary depending upon the state.

Another challenge will be in finding a position as a security guard. It’s important to be honest when applying as a security guard. If a felony isn’t disclosed but is found on a background check this constitutes fraud and is punishable by jail time. It’s a crime to falsify an application, which could result in being sent back to prison.

Having their record expunged can give them the chance needed to begin with a clean record and succeed in getting a guard card. Expunging a criminal record allows anyone to honestly state on an application that he or she has not been convicted of a crime.

It is a major challenge, but it might be worth it for a felon wanting to get a guard card. Giving him or herself the best chance for success by having his or her record expunged and also documenting additional education could make the essential difference.

Having support from family, friends, or previous employers can also make a huge difference. A felon doesn’t have to be defined by his or her crime. We are not defined by our mistakes but by how we recover from them. He or she can begin again and live an honest life and achieve his or her goal no matter how difficult it might seem.

What do you think about this blog post? Have you or someone you know been in the situation of trying to get a guard card with a felony? What was that like for him or her, and how did he or she achieve success? Please tell us in the comments below.

1 thought on “Can a Felon Get a Guard Card?”