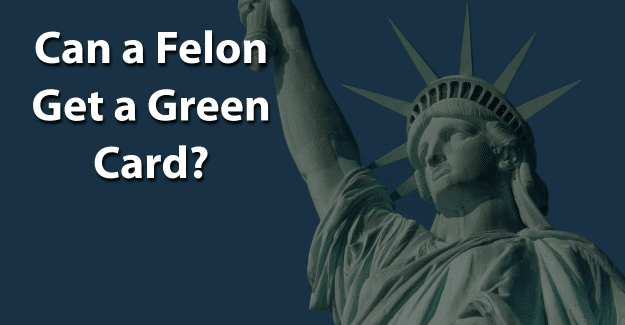 Felons face many restrictions on their rights following a conviction. They lose the right to vote, hold public office, and serve on a jury.

As natural citizens of the United States, citizenship is not lost as a result of a felony conviction. But, what about those felons who want to become U. S. citizens? Can they get a green card with a felony?

This blog post will cover whether or not a felon can get a green card.

What is a Green Card?

Those persons entering the U.S. who are planning to stay in the country for more than 90 days are typically required to have a visa. As a foreign-born person, there are regulations they must meet to be able to remain and reside in this country.

U.S. law states that only a set number of people can be granted residence in the U.S. each year.

Those that wish to reside here must apply for a green card. Having a green card, which derived its name from the color of the card, will allow a person to permanently live in this country legally.  However, the government strictly limits the number of immigrants who are allowed to live here to include certain categories.

The first category is an immediate relative of a U.S. citizen. This includes:

The second category is an immigrant worker, including a person who:

The green card application process differs based on the method in which someone seeks to obtain a green card.

There are many circumstances that will result in a felon being denied a green card. A recent felony conviction is one of the most common reasons for denial. It may even be grounds for deportation.

Certain crimes will permanently affect a felon’s chances of getting a green card. These crimes include:

If someone has been charged with a felony and the charges are dropped, he or she will still be able to receive a green card. An immigration lawyer should be contacted for any questions.

According to U.S. Citizenship and Immigration Services, the criteria for being awarded a green card includes demonstrating good moral character for at least three years prior to the application.

An applicant shall be found to lack good moral character, if the applicant has been:

The candidate will be found to lack good moral character if during the statutory period the applicant is:

The following relates to good moral character and record expungement:

It is important to be honest while filling out an application when applying for a green card. If a felony isn’t disclosed but is found on a background check, this constitutes fraud and is punishable. It is a crime to falsify an application, which could result in being sent back to prison.

In order to be successful in getting a green card, it is essential for felons to be honest about their background. They are already seen with negative perceptions of being dishonest, untrustworthy, and unwilling or unable to follow directions from authority figures.

Having their record expunged can give them the chance needed to begin with a clean record and succeed in getting a green card. Expunging a criminal record allows anyone to honestly state on an application that he or she has not been convicted of a crime.

It is a big challenge, but it might be worth it for a felon wanting to get a green card. Having his or her record expunged and also documenting any training programs or additional education could make the essential difference for a felon in demonstrating good moral character.

What do you think about this blog post? Have you or someone you know been in the situation of trying to get a green card with a felony? What was that like for him or her, and how did he or she achieve success? Please tell us in the comments below.