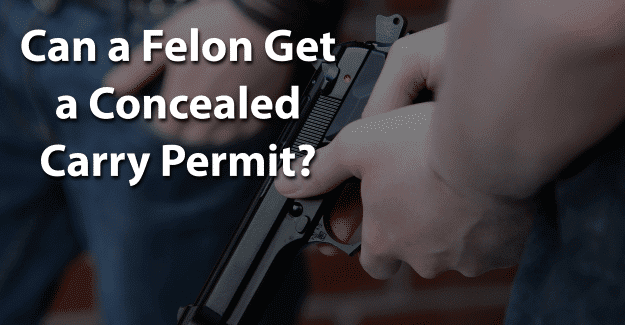 After being released from prison for a felony, it can be hard to understand what individual rights change. State and federal restrictions don’t always work together, and it’s hard to get through the red tape. Getting help in restoring firearm rights and navigating the red tape is not simple. Unfortunately, this pitfall is a place where individuals with a felony on their record fail.

One area of importance a convicted felon should understand is firearm rights restrictions.

After leaving prison, there are federal restrictions that stop people from owning a gun. Even if an individual does not commit a violent felony, their rights will dramatically change. It is possible to regain firearm rights after a felony, however, several factors can affect one’s eligibility.

In this article, we will answer the following questions.

What is a Concealed Carry Permit?

While these states may allow gun owners to conceal a firearm in public without a permit, some restrictions still exist. Several states require individuals to submit an application or complete gun safety classes to qualify for a concealed carry permit.

What Can Keep Someone From Getting A Concealed Weapons Permit?

Anyone seeking to purchase a firearm from a federally licensed gun dealer in the United States must first complete a background check. After passing a federal background check and obtaining a firearm, the next step will be understanding state and local laws when it comes to carrying a concealed weapon.

An individual’s criminal history, mental health, immigration status, and military service record, will play a role in getting a firearm. However, the restrictions that exist for getting a concealed carry weapon vary by state.

In every state, gun owners have a path to legally carrying a concealed firearm. Nine states can deny applicants from receiving a concealed carry permit.

These states can deny individuals the right to a concealed carry permit, effectively prohibiting them from legally concealing a firearm in public.

After being convicted of a felony, it can be difficult to lawfully obtain a firearm. The chances of being granted a concealed carry permit, after committing a felony, is very low. Firearm restrictions are different in each state, and it would be wise to contact the state agency in question to understand the restrictions.

States That Allow Felons To Have A Concealed Weapons Permit

Felony offenders can have their firearm rights restored, in time. However, individuals convicted of a violent felony offense, where someone is harmed or killed, permanently lose the right to carry a concealed firearm.

Individuals convicted of a non-violent felony may need to wait at least 10 years to get a concealed carry permit. It is important to contact a lawyer in the state of residence for legal advice.

Can You Buy A Gun With A Misdemeanor?

It is possible to purchase a gun after having been convicted of a misdemeanor, but it will depend on the crime committed and the state and local laws. The following misdemeanors can prevent someone from owning a firearm.

Can You Have A Gun With a Misdemeanor Drug Charge?

In addition to federal law, state laws can generally add more restrictions, and gun ownership rights can be denied on a case by case basis. Therefore, it is important to reference state and local laws and seek legal advice for specific circumstances.

To learn more about federally restricted persons, visit the ATF website. Additionally, state and local laws can be found online here and requested from the local Attorney General’s office.

Can You Get A Concealed Carry Permit With a Misdemeanor?

Having a misdemeanor does not necessarily disqualify an individual from obtaining a concealed carry permit, but it will depend on the type of conviction and state and local laws.

The first step an individual can take will be to learn more about existing state restrictions. Generally, if the misdemeanor committed is punishable by over a year in jail or is violent in any way, then the obstacles to obtaining a firearm or a concealed carry permit may be hard to overcome. Every state has a website with a vast library of information and can be found via the library of congress here: https://www.loc.gov/law/help/guide/states/us-nm.php.

Trying to get your firearm rights restored is really going to depend on what state you live in. For the most part, usually, a pardon after a certain amount of time is possible in most states, but it’s not that simple. One way for felons to once again own a firearm is to have their records expunged. The process depends on whether their felony conviction was from the state or the federal government.

For example, federal law prohibits individuals that are convicted of a misdemeanor domestic violence from ever owning a firearm. This law forces the state to deny firearms to individuals who do not receive a pardon or have their records expunged.

If the conviction came from the federal court, there is an application procedure to follow. This application is filed with the U.S. Attorney’s office or with the Bureau of Alcohol, Tobacco, and Firearms. There are of course conditions that must be met in gaining approval to own a firearm again.

For those individuals with nonviolent felonies, or those considered to be minor, the process is not as difficult, provided they have lived a crime-free life for 20 years, following release from incarceration.

In order to establish having lived a clean life for the past 20 years, felons must demonstrate a stable work history and strong, healthy ties to their community.

Employment is probably the most challenging aspect of returning to society. Many felons struggle with finding a job because of the stigma of having a felony record deters employers from hiring felons. However, there are companies that are willing to give felons a second chance.

Having healthy ties to the community involves having good relationships with family and friends, as well as being involved in community and volunteer work. Maintaining and documenting that involvement will be valuable to felons hoping to regain firearm rights, as well as any other rights. Volunteer work, attending a re-entry program, and making contributions to the community will aid their case. Eliminating bad influences in friend groups, and staying in positive environments will also be an important factor in restoring individual’s gun rights. Another way to have firearm rights restored is by seeking a presidential pardon or having your record expunged.

The staff at JobsForFelonsHub.com are not lawyers and urge you to contact a lawyer directly in order to get your firearm rights questions answered. You can do that affordably by using this website.

So what do you think about this blog post concerning felons and their firearm rights? Have you or someone you know been in this situation? What was that like and were they successful? Please tell us in the comments below.

4 thoughts on “Can a Felon Get a Concealed Carry Permit?”