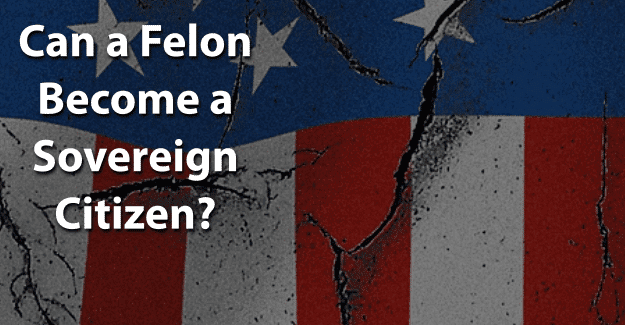 It is a longstanding American tradition to openly protest and disagree with laws, taxes, and regulations put in place by the government leaders. While most citizens would restrict themselves to peaceful protesting, some do not stop there. Citizens that heavily oppose the government may go to the extreme of declaring themselves sovereign citizens.

As a felon, it may seem to be an attractive option for quickly gaining individual rights, but is it legal? In this article, we will address the issue of whether or not a felon can become a sovereign citizen.

What is a Sovereign Citizen?

The Sovereign Citizen Movement is considered an extreme political position with over an estimate of over 300,000 followers. It is impossible to get an accurate account of members because there is no centralized leadership.

The Sovereign Citizens Movement came from the conspiracy theory that beginning in 1933, the U.S government ended operation under common law, and started operating under admiralty law. This false idea forces followers to believe that the U.S. government sees it’s citizens as slaves, and the judges and courts are a means of keeping them in line with financial slavery.

At its core, the Sovereign Citizens Movement can be racist and anti-Semitic. Early sovereign movement leaders believe jews to be at the heart of financial institutions that have gained control of the government. Additionally, many sovereign individuals believe you must be white to become a sovereign citizen because of the 14th amendment.

A sovereign citizen believes there are two types of citizens: natural citizens, and Fourteenth Amendment citizens.

Fourteenth Amendment citizens are viewed as being subject to federal and common law.

Sovereign citizens view themselves as fighting against the government and other forms of authority, using paper terrorism harassment and intimidation tactics.

Some of the supposed advantages of being a sovereign citizen are:

How to Become a Sovereign Citizen

Becoming a sovereign citizen does not involve any application or criminal background check. As a designation, it’s basically self-proclaimed and lived out as an individual choice.

Sovereign is defined as “possessing supreme or ultimate power.” Those that declare themselves sovereign only believe in their authority. Some individuals will cancel their Social Security Number and birth certificate. These are actions that reflect their declaration of sovereignty.

Currently, there is no local government that recognizes sovereign citizens. The FBI has designated sovereign citizens domestic terrorists. The Sovereign Citizens Movement is largely viewed as an extremist ideology that threatens American citizens.

In 2010, two officers were killed during a traffic stop by two armed sovereign citizens. Since that time, many local law enforcement agencies and supporters view sovereign citizens as unwilling to respect or follow any law. During encounters with suspected sovereign citizens, officers are trained to be on high alert and use any tactical actions necessary to ensure safety.

Local governments may label individuals that have declared sovereignty as a danger to public safety. The perception of sovereign citizens may give people who need to rebuild a reputation a bad start.

Do Sovereign Citizens Have Rights?

Sovereign citizens are afforded the same rights as any other American citizen. The ability to declare oneself a sovereign citizen is an example of the first amendment right to freedom of speech.

Sovereign citizens are not recognized by federal, state, or local laws as immune to or restricted from exercising their civil rights, however, they are labeled as a domestic terrorist. Most sovereign citizens claim that the federal court has no jurisdiction to try them for a felony or a misdemeanor. A sovereign citizen will deny the validity of any law and believe that they cannot be found guilty of any violation of criminal laws. Declaring sovereignty from the U.S. does not legally grant an individual any additional rights.

A sovereign citizen will protest any attempt to get him or her into court for any legal proceeding. At these times, a sovereign citizen may be found in contempt of court. For those who repeatedly go against court orders, he or she can be charged with a misdemeanor, and if this occurs often enough, it can become a felony charge.

Can You Legally Become a Sovereign Citizen?

While this may seem like an option that would provide the most freedom for a felon seeking rights immediately after leaving prison, becoming a sovereign citizen may not be an option.

As a felon, taking such a stance and inviting criminal charges only places him or her in an extremely dangerous situation. It would be easy for a felon under these circumstances to be sent back to prison because of their prior criminal history.

A judge could easily decide a felon sovereign citizen has already lived in a way that is placed him or herself above the law. Becoming a sovereign citizen would only add to this view as a further demonstration of his or her disregard for legal consequences.

Felons are already seen as being dishonest, untrustworthy, and unwilling or unable to follow directions from authority figures. Consistently ignoring federal regulations would defeat the purpose of expungement and set a felon up for further difficulties with the law.

While a felon can become a sovereign citizen, it’s not a recommended course of action.

*Please note, this article is for informational purposes only. The staff at JobsForFelonsHub.com are not lawyers and urge you to contact a lawyer directly in order to get sovereignty questions answered. You can do that affordably by using this website.

9 thoughts on “Can a Felon Become a Sovereign Citizen?”