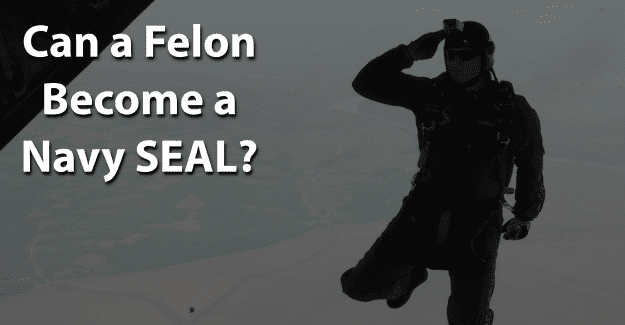 Some felons have the desire to serve their country and many have done so before their incarceration. For those that still want to serve and that have the desire to be in a special force in the military, they may have thoughts of becoming a Navy SEAL.

This blog post will address the issue of whether or not a felon can become a Navy SEAL.

What is a Navy SEAL?

In the 1960’s, each branch of the military began its own specialized force. The Navy used Underwater Demolitions Team (UDT) personnel to form units called SEAL teams. These teams were developed to conduct unconventional warfare and secret operations for the Navy. The Navy SEALs were established by President John F. Kennedy in 1962.

The Navy’s sea, air, and land forces, known as SEALs, are trained to deliver highly-specialized warfare capabilities that go beyond the capabilities of standard military forces.

A SEAL’s duties include, but are not limited to:

What Training Does a Navy SEAL Need?

In order to become a SEAL, candidates are required to meet the following qualifications:

Becoming a Navy SEAL involves more than 12 months of initial training in areas including:

This is followed by an additional 18 months of pre-deployment training and intensive specialized training.

Becoming a SEAL begins by being in the Navy. There are three options for becoming a Navy SEAL:

An applicant must pass:

For enlistment in the military, there is no such thing as a sealed record or an expunged record. All incidents resulting in arrest, charges, or conviction must be disclosed before enlistment.

All Navy SEALS must pass an extensive background investigation. The candidate must be able to obtain a proper security clearance. The Navy considers a felony conviction an automatic disqualification for all candidates, regardless of the job.

Getting a Security Clearance

A security clearance is granted to someone who has completed an appropriate personnel security background investigation. The investigation determines whether a person’s personal and professional history indicates loyalty to the United States through:

A felon would most likely not be considered to become a Navy SEAL.

An applicant who has one felony as an adult or up to two felonies as a juvenile may apply for a moral waiver from the commander of the Navy recruiting command. If the waiver is granted, a felon can enter the Navy. Anyone with two or more felonies on his or her adult record or three or more felonies at any age is not eligible to apply for a waiver.

Certain felonies are automatic disqualifications from entering the Navy. These are sex crimes, including:

A felony conviction will not automatically disqualify someone for a security clearance. However, a criminal record could be especially difficult to achieve if other factors reflect negatively on a person’s background and character.

Felony crimes that are problematic involve:

The following are positive factors for an applicant:

Obtaining a security clearance will depend on the particular offense. Even if the criminal record is expunged, all charges within the past seven years must be disclosed when applying for a security clearance. Someone must disclose information regardless of whether the record was sealed, expunged, or dismissed.

It’s important to be honest when applying to become a Navy SEAL. If a felony isn’t disclosed but is found on a background check this constitutes fraud and is punishable by jail time. It is a crime to falsify an application, which could result in being sent back to prison.

It’s a major challenge, but it might be worth it for a felon wanting to become a Navy SEAL. Giving himself the best chance for success by having his record expunged and also documenting any training programs or additional education could make a critical difference.

Having support from family, friends, or previous employers can make a huge difference. A felon doesn’t have to be defined by his crime. We are not defined by our mistakes but by how we recover from them. He can begin again, live an honest life, and achieve his goals no matter how difficult it might seem.

What do you think about this blog post? Have you or someone you know been in the situation of trying to become a Navy SEAL with a felony? What was that like for him, and how did they achieve success? Please tell us in the comments below.

4 thoughts on “Can a Felon Become a Navy SEAL?”