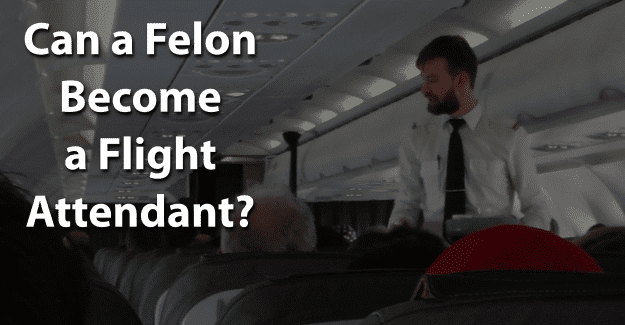 Thinking of grabbing a job in the friendly skies? Maybe you want to work for an airline as a flight attendant.

But can a felon become a flight attendant?

What Is a Flight Attendant?

As a flight attendant, you typically do such things as demonstrate the use of safety and emergency equipment. You serve beverages, meals, and snacks. You would also need to be prepared to deal with emergencies and assist passengers in evacuating an aircraft.

There’s a lot to it, but it can be a rewarding career.

So, how does this go?

Requirements to Become a Flight Attendant

If you want to become a flight attendant, you need to have a high school diploma or GED. That’s not always the requirement as some airlines want you to have a college degree.

According to the Federal Aviation Administration (FAA), you must be at least 18 years old, although some employers have higher minimum age requirements. Just because of the type of position it is, you need to have experience working with the public and one or two years of work experience in a service occupation.

There are also physical requirements to meet. You must be between 5’0” and 5’11” in order to reach overhead bins. Your vision must be correctable to at least 20/40.

You will learn emergency procedures such as evacuating an aircraft, operating emergency equipment, and administering first aid.

If you are hired as a flight attendant, you will need to undergo training, ranging from three to six weeks at the airline’s flight training center.

You will have to pass a proficiency test after completing an employer’s initial training program. There are training programs in place that offer a flight attendant certification required by the FAA called a Certificate of Demonstrated Proficiency.

Flight attendants are certified for specific types of aircraft and must take training for the type of aircraft on which they are to work. As a flight attendant, you will continue to receive additional on-the-job training to maintain your certification.

It really is more than just a job. It is a career and not easy to get there.

How Much Does a Flight Attendant Earn?

The U.S. Bureau of Labor Statistics indicates that there are approximately 119,000 flight attendants in the U.S. with a median annual wage of $56,640 in 2019. While this has shown a lot of growth over the years, not so much now. Recent world and health events have led to a significant slowdown for this career path.

Your earnings will still depend on your experience and what part of the country you live and work in. A flight attendant working on the East or West coast tends to have a higher income than in other regions of the country.

Yes there is a background check. Just think about it. This is a career in the aviation industry.

As such, you will encounter the expectations of the Transportation Security Administration (TSA). When you say that, any background check will be thorough.

There are actually two background checks you will have to go through.

First is the background check for whatever airline you apply to. That will vary according to the airline. This may be a typical review looking at the past seven years along with a credit check and a drug test. The FAA establishes certain guidelines that each flight attendant must meet through a rather restrictive background check.

According to the FAA, you will have to pass a 10-year background and credit check. These will be done using an FBI fingerprint check. Many jobs will only look back over the past seven years. The FAA doesn’t think that is sufficient and demands a 10-year check. The credit check will allow them to know about whether or not you are responsible with your finances.

Then there will be random drug and alcohol testing. That is a strict investigation. The FAA doesn’t want to have someone who has issues with drugs and alcohol since a flight attendant must serve alcohol to passengers.

If you had a felony conviction within the past five years or if there was more than one felony, you will not be eligible to become a flight attendant. The reason for this is that most airlines require all flight attendants to be able to enter and leave Canada legally.

According to Canadian law, any U.S. citizen convicted of a felony cannot enter Canada unless you complete the Canadian Criminal Rehabilitation procedure to ensure legal entry into Canada. As a felon, you may also be able to obtain a waiver from Canadian Immigration to be eligible to become a flight attendant.

Does the Type of Felony Make a Difference?

As you might expect, the type of felony does make a difference. Let’s look at this issue.

The FAA has established a list of crimes that are considered serious enough to prevent you from obtaining the type of certification to qualify as a flight attendant. This includes any felony or a violent crime that may not be at a felony level.

As you can see from the above, a felony conviction would eliminate you from consideration the FAA has set to become a flight attendant.

You will have to be honest about your criminal history when you want to become a flight attendant. If you think you can cover up a felony conviction and get by with it, you are in for a rude awakening. This will be discovered and not only eliminate you from consideration to be a flight attendant, but it will likely result in being charged with a felony for being dishonest on an application. This could result in your going back to prison.

You could also check to see if you are eligible to have your record expunged. That way you could honestly state on an application that you have not been convicted of a felony.

You have made a lot of mistakes in the past, but you don’t have to be defined by them. You are defined by how you recover from those mistakes.

If you want to become a flight attendant, don’t get discouraged and give up.

It won’t be easy, but you can live an honest lifestyle that could include becoming a flight attendant if you are willing to do all the things necessary to deal with your criminal record.

What do you think about this blog post? Have you or someone you know been in the situation of trying to become a flight attendant with a felony? What was that like, and what happened? Please tell us in the comments below.

2 thoughts on “Can a Felon Become a Flight Attendant?”