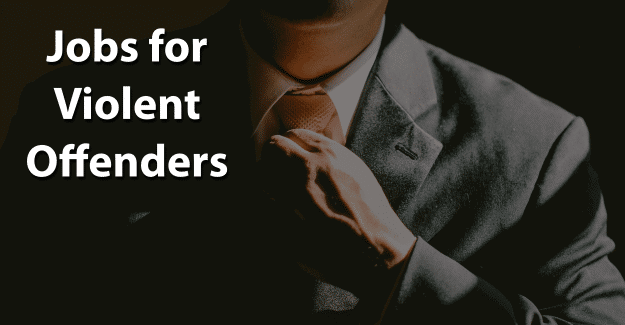 A criminal conviction can completely change a person’s life. It has negative consequences that last for years. Perhaps the most significant challenge comes in finding a job after a violent conviction. Felons wonder if anyone will hire them.

This blog post will address the issue of what jobs are available for violent offenders.

A felony is a serious criminal offense involving a sentence of at least one year in prison. There are two categories of felonies: violent and non-violent. The consequences for either type of conviction are similar, including:

A violent felony is defined as a crime that has “an element of the use, attempted use, or threatened use of physical force against another person, or is burglary, arson, or extortion, involving the use of explosives or otherwise involving conduct that presents a serious potential risk of physical injury to another person.” Violent felonies are prosecuted more vigorously and typically carry more severe penalties than a nonviolent crime.

Violent felonies are often referred to as crimes against a person because they involve direct and substantial physical harm to a victim. Finding a lawyer will be crucial in any of these circumstances.

Even after the terms of the sentence have been completed, there will still be a criminal record for the remainder of a person’s life.

Effects of a Violent Conviction on a Career

A violent conviction will not absolutely prevent a felon from finding a job, but it certainly makes it much more difficult. Employers are already reluctant to hire anyone with a criminal record, that’s especially true if it’s a violent offense.

One of the difficulties of being hired for a position with any type of conviction is that an employer tends to see all crimes as being of equal severity. With any offense, many employers have the view that a felon is dangerous regardless of the type of crime.

There will be drastic effects on job opportunities for a felon with a violent offense. There are a number of reasons it’s challenging to get a job with a violent conviction.

Prospective employers will usually ask about a criminal record and conduct a background investigation because they want to hire someone they can trust. An employer will review someone’s criminal record to determine if the type of crime involved in the conviction has any bearing on that job.

Violent offenses can severely damage someone’s career as many professions require certification, licensing, or registration with a governing board. However, a violent offense may lead to suspending or revoking someone’s ability to practice their profession in a given state.

The Department of Health in each state may limit licensing of:

Careers that May be Challenging to Enter

To be eligible for employment with many federal agencies, an applicant must meet certain standards. Situations that may disqualify a candidate for a federal position include conviction of a felony whether it’s a violent crime or not.

A violent criminal history can prevent federal employment in certain jobs. For example, the Office of Personnel Management regulations prohibit those with even a domestic violence misdemeaner conviction from working in a position that involves firearms or ammunition.

Careers that May be Easier to Enter

It’s easy to become discouraged when applying for jobs even under the best circumstances. Having a violent conviction only makes this even more challenging.

However, there are a number of areas in which a violent offender can find work. Each of these involves some education and training specific to that field.

There are many college degrees that help felons get an education and find employment even with a violent crime on their record. These include areas such as criminal justice, engineering, and social work.

A felon with a violent conviction can pursue any degree he or she wants. Although 60% of colleges consider criminal history in their admissions process, there’s no standard policy regarding a background check.

Any felon that wants to get a degree can find a college that will accept him or her. The challenge may be in obtaining a job after graduating, but this can be accomplished with perseverance.

There are a number of truck driving jobs available with companies that are willing to hire felons with a violent conviction. It’s generally recommended to attend a program first to obtain a Commercial Driver’s License (CDL) which is required for most truck driving jobs.

There are a number of trades within the construction industry, including:

Some fast food restaurants will hire violent offenders. These include:

Most felons can expect to find work in the kitchen in these restaurants where they won’t be in direct contact with the public.

Temp agencies are another good choice for felons with a violent offense. Since they work with a variety of employers, there are more opportunities to find one willing to hire a felon.

There are also opportunities for felons who want to start their own business. Being an independent contractor can offer those with a violent offense a chance to work for themselves and fully utilize their skills.

Those positions that directly employ individuals for a W-2 job often conduct a background check while those that contract with someone for an independent 1099 position typically do not complete a background check.

Felons may have the best chance at finding work online since they don’t need to have any contact with customers, clients, or other employees this way. Plus, there are a surprising variety of online positions available.

How to Deal with a Violent Offense on a Job Application

Many states allow felony convictions to be expunged from a record. If this is available, it would certainly be helpful to clean up a criminal record. The report from court where the charges were filed may also help. Checking with county, state, and federal courts is recommended.

When applying for a job, a question of a violent criminal conviction needs to be answered truthfully. Someone may be automatically disqualified if there is a lie that is discovered by a potential employer.

Specific information regarding a criminal record should be clearly stated to a potential employer in this way:

Making a Case for Employment

A violent conviction should be explained briefly and accurately. A felon needs to take ownership of the mistake and state what that experience taught, and how he or she has changed since then.

When asked about a violent conviction, it’s important to answer the question directly and honestly. Making mistakes is part of life. Showing that he or she is qualified and honest will give the best chance to find employment.

Rather than focusing on the crime itself, a felon should shine light on the things he or she is doing now to move beyond his or her mistakes to live an honest life. Things like anger management classes, drug rehabilitation, or additional education can all show a felon is ready to enter the workforce.

What do you think about this blog post? Have you or someone you know been in the situation of trying to get hired with a violent offense on his or her record? What was that like for him or her, and how did he or she achieve success? Please tell us in the comments below.

32 thoughts on “Jobs for Violent Offenders”

Temp Agencies that hire felons in the surrounding States

Other Helpful Resources for Felons

How To Pass A Drug Test: Methods To Pass That Next Test

How Long Does A Background Check Take In 2022?