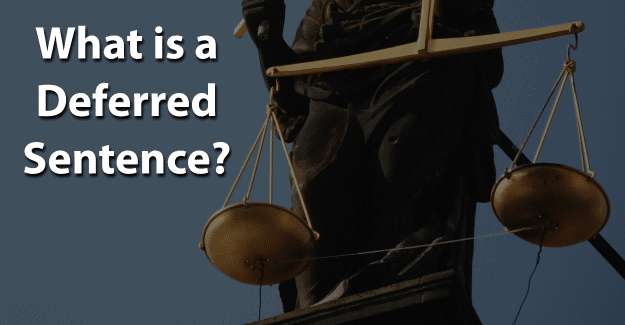 For those convicted of a crime for the first time, they may have had the experience of being offered a deferred sentence in exchange for a guilty plea or one of no contest.

What exactly does that mean?

What is a deferred sentence, and how does that come about? Let’s take a look and understand this process.

In this article, we’ll cover the following:

What is a Deferred Sentence?

After being charged with a crime, a court trial takes place. Evidence is presented, and a decision is handed down; the result may be a guilty verdict. If you are found guilty, a sentence will result in some type of punishment.

Not only is the sentence intended to punish and hopefully rehabilitate the offender, it is also to provide restitution to the victims.

The legal system hopes that these actions will protect the public and ultimately reduce crime.

Most sentences earned by a defendant are what are called determinate sentences, meaning for a specified period of time. Others are for a range of years and are open-ended ones that are termed indeterminate.

For those that have been convicted of multiple crimes, sentences may be consecutive (served sequentially) or concurrent (served at the same time). Yet another type is a deferred sentence.

Let’s consider what a deferred sentence is.

A deferred sentence is a postponing or delaying the sentence in a criminal case. The court may give you the opportunity to complete probation lasting up to two years. If all terms are met during this time, a judge can dismiss the charges.

A deferred sentence gives you an opportunity to have a conviction dismissed after satisfying all terms of probation. You may plead guilty or no contest to be eligible for a deferred sentence. This typically occurs as part of a plea deal and is usually given to a first time offender or someone who has committed a minor crime. In any event, it is essential to consult with an attorney.

Conditions that must be met in the case for a deferred sentence include:

A record will still be available until all terms have been met, which could have an impact on a job search.

Having a deferred sentence will allow the case to be dismissed later.

While this is generally called a deferred sentence in many states, such as Colorado, Iowa, Oklahoma, and Rhode Island, in some states like Texas, it is considered to be deferred adjudication.

The important point is that pleading guilty or no contest as part of a plea deal in a criminal case can result in being placed on a probationary period. Meeting all terms of this probation will allow the case to be dismissed at the end of this term.

What is a Deferred Judgment?

After that time, if all terms of the agreement have been met, the district attorney will file a motion in court to permit you to withdraw the guilty plea. At that time, the charge will be dismissed.

Can a Felon Receive a Deferred Sentence?

A deferred sentence is reserved for first-time offenders and for those convicted of a lesser crime, usually a misdemeanor. Therefore, a felon is typically not eligible to receive a deferred sentence.

Is a Deferred Sentence Considered a Conviction?

Whether a deferred sentence is considered to be a conviction depends on the outcome of the deferral period.

If all conditions are met, you will have no criminal record. This will allow you to honestly state on a job application that there is no conviction.

However, there will be a public record of the arrest, the criminal charges, and the court proceedings. In this case, a partial expungement may be available, meaning that charges will be wiped off the criminal record.

A full expungement can be obtained after a 10-year period following a deferred sentence.  In the case of misdemeanor, a fully expunged record can take place after one year.

In the case of a deferred sentence, the case will be dismissed and the judge may throw out the sentence and the guilty plea. A request may be filed to seal the criminal arrest record to keep those out of the public record.

Will a Deferred Sentence Show up on a Background Check?

If you have received a deferred sentence, what will show up on a background check? During the probation period, a conviction would show up on a check of your background.

An employer may conduct a background check when you apply for a job that will show all convictions and non-convictions, including those prosecuted or dismissed.

After the probationary time has passed, as long as all terms of that probation have been met, a background check will not show that conviction.

What Happens if You Violate the Terms of a Deferred Sentence?

Now, we know that if you accept a deferred sentence along with the terms that have been set up, you likely intend to honor those terms. But what happens if you are unable or become unwilling to meet all of those terms?

A deferred sentence is a more favorable outcome than simply serving a prison term. If you have received a deferred sentence, don’t get discouraged. With the support of family and friends, you can get through this.

Just remember that on the other side of it is a chance to have that conviction dropped, the opportunity to set things right, and once again live an honest life.